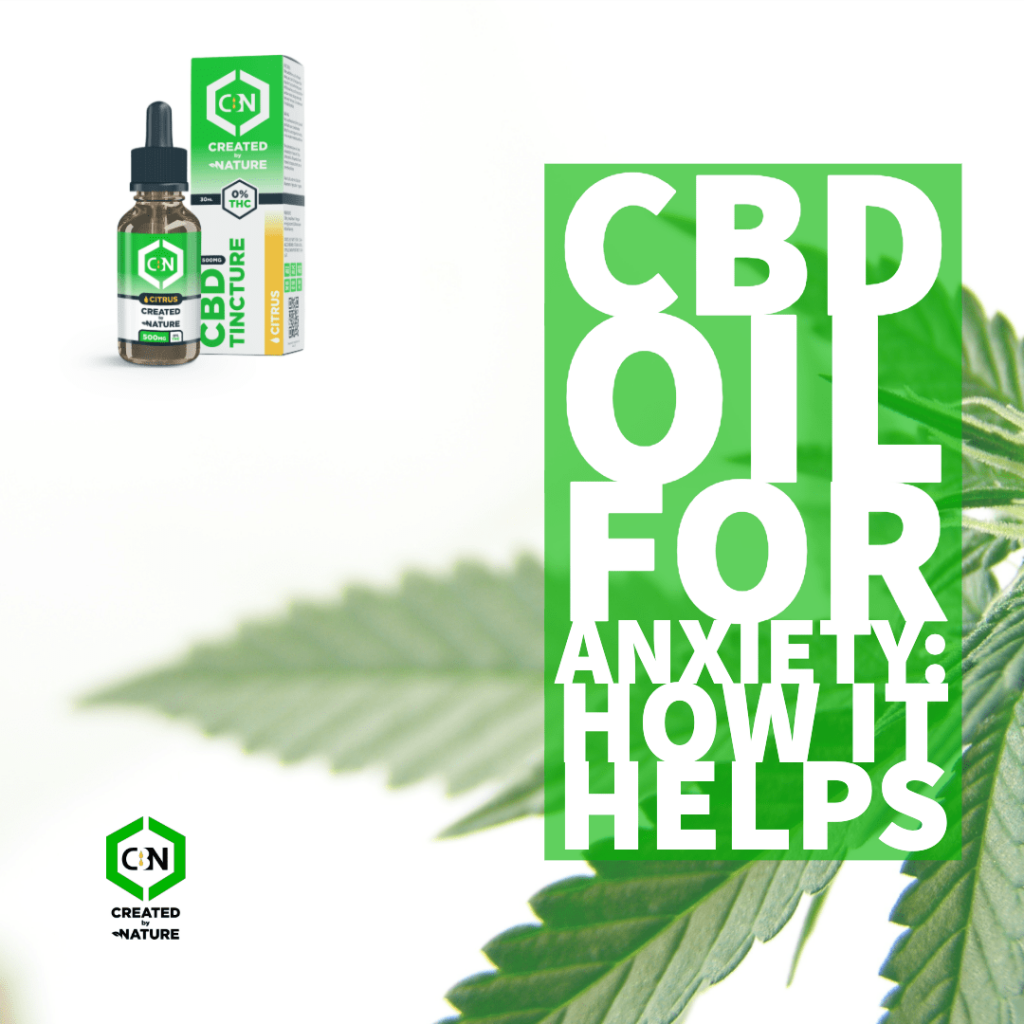 CBD Oil for Anxiety: How It Helps

In recent times, cannabidiol alternatively referred to as CBD oil has become a widely accepted remedy for anxiety. While some individuals derive pleasure consuming CBD oil as a method of soothing everyday worries, other categories of individuals make use of it as a treatment for a wide range of severe health conditions such as the generalized anxiety disorder.

What is CBD Oil?

Cannabidiol is a compound extracted from cannabis plants and can be used as an oil. CBD oil is abundant in chemicals that are known as cannabinoids, and it creates a strong bond with some specialized receptors in the nervous system.

In the present world, the most widely known cannabinoid is tetrahydrocannabinol (THC). It is the main component of marijuana that makes people have a sense of feeling “high” whenever they take marijuana.

Over the years, Cannabidiol has rapidly increased in its availability as there exists an emergence of new laws that have legalized the legitimate use of marijuana in numerous parts of the world. Similarly, a growing number of companies began venturing into selling supplements, salves and a host of other CBD oil-made products. However, many of these CBD oil products are believed to be the natural remedies that effectively works for issues relating to anxiety as well as pains.

Unlike Tetrahydrocannabinols (THC), cannabidiol doesn’t produce any “high” sensation or feeling upon consumption. However, one needs to know that the legalized use of CBD oil isn’t applicable in every state. As a result of the legally murky nature of marijuana, state laws on the use of marijuana tends to vary widely especially when it comes to cannabis products of any kind.

Therefore, it is highly essential that you conduct your researches on the legality of the use of CBD oil in your respective states before you venture into using these products. This will guide you in order not to go against the laws of the land.

Anxiety is one of the most common health conditions affecting both the emotional and behavioral states of humans in the present world. As reported by the World Health Organization, an estimated 264 million people lives with anxiety all over the universe.

Every day, various researchers and professionals in the health care sector from all around the globe have continued to do multiple research experiments. This will enable them to discover new ways to help people manage stress, anxiety, and depression.

In short, anxiety is a psychological condition characterized by an excessive state of worry and restlessness. Majority of people dealing with stress and anxiety are having hard times. This is detrimental especially when it comes to making decisions, tolerating criticism and making speeches in public.

Generally, anxiety disorder is one of the most common mental illness in the United States. The Anxiety and Depression Association of America reports that anxiety affects about 18% of the United States’ population.

Although, anxiety disorders can alternatively be treated with medications, psychotherapy or the combination of both without any further issues. Many people are also on the verge of adopting new strategies that are considered more effective in eradicating anxiety such as the use of CBD Oils.

A survey on Cannabis and Cannabinoid Research in 2018 states that about 62% of anxiety patients who used CBD oil in the treatment of medical conditions such as pains, anxiety, and depression found it very useful and recorded positive changes.

While the majority of people in their right senses won’t think anxiety is a desirable state of mental health, others would think that anxiety is a critical adaptive response that mostly helps people cope with threats to the safety and welfare of friends, families and loved ones.

These adaptive responses can be extremely functional in recognizing and averting further potential threats. Apart from that, we can also be motivated to take actions that are considered best for our situations. For instance, one can be driven to work harder, improve relationships and pay off bills.

However, whenever these natural responses aren’t managed effectively, they can turn out becoming maladaptive while also posing a detrimental threat to our work as well as relationships. This will, in turn, result in clinically diagnosable anxiety-related disorders. Yes, it’s true, we’ve all heard that “stress kills” and it an evident truth.

Over the years, disorders relating to anxiety has affected and still affecting a vast segment of the world’s population. Several kinds of research studies have proven that 40 million adults amounting to 18% of United States citizens older than 18 are suffering from anxiety-related conditions.

In the course of combatting this, numerous products have been produced to treat anxiety-related disorders. Some of these drugs include serotonin reuptake inhibitions such as Zoloft and Prozac, benzodiazepines and many more.

While these drugs can be considered adequate for many patients, some other patients do not seem to respond favorably. Certain individual patients do not observe any much improvement whatsoever. Other patients often feel that the adverse effects can't be tolerated at all. More so, tranquilizers like Xanax and Valium can be highly adaptive.

With this, you would have deduced that there is a great need for alternative treatment options. Many would begin to wonder… Could cannabidoils provide a viable option for anxiety medications? Is it quite possible? Yes, it is possible.

In recent years, cannabidiols is considered the most prominent non-intoxicating constituents of cannabis. This has widely generated a tremendous amount of research interest among clinicians, scientists, researchers, consumers and many more. Why? Not only does available evidence suggest that CBD oils counter effects many of the adverse impacts of THC’s.

Other range of studies conducted on animals and other proofs from clinical, experimental and epidemiological studies asserts that CBD oils contain powerful anti-anxiety properties.

At the end of those researches, it was concluded that CBD oils if administered acutely, can be safe, well tolerated and also beneficial in the treatment of a variety of anxiety-related disorders.

How does CBD Oil Works for Anxiety?

CBD oil when administered for the treatment of anxiety, it exerts several actions in the brain cells, and this clearly explains the reasons why it could be a remedy for anxiety.

However, before we dive fully into the methods of actions of CBD oils on anxiety, it is highly essential to be aware that various studies conducted on the effectiveness of CBD oil for anxiety are pre-clinical and based on animal studies only.

As people do say, “mice aren’t men.” And yes, the results gotten from these studies on animals aren’t always transferred to human therapies. However, preclinical studies are better to provide insights that can get researchers in the right directions.

This is one of the reasons why various companies manufacture and produces selective serotonin reuptake inhibitors (SSRIs) such as Zoloft and Prozac. These SSRIs are very functional when it comes to blocking the synaptic space.

With this, the brain cells will be allowed to transmit more serotonin signals which will, in turn, reduce anxiety while also boosting the mode of that particular individual in some instances

Similarly, CBD oils are also very effective in boosting signals specifically through the serotonin receptors. From an animal-based research, it was proven that CBD oil enhances the transmission of 5-HT1A. Apart from that, it also tends to affect the serotonin levels at a faster pace than the SSRIs.

Hippocampal Neurogenesis: The hippocampus is considered a significant area in the brain which plays a critical role when it comes to various brain functions. This area is particularly famous for its critical roles in the formation of memory as well as cognition.

Whenever you scan the brains of persons suffering from anxiety, you’ll observe the presence of smaller hippocampus. The successful treatment of anxiety and depression is commonly associated with the birth of new neurons in the hippocampus. This is referred to as neurogenesis.

From an animal-based research, there are evidences that repeated administration of CBD oils helps the hippocampus to regenerate more neurons. More so, this could be used as a treatment method for both anxiety and depression.

Furthermore, various experiments have shown that both CBD oils and SSRIs are incredibly useful in the promotion of neurogenesis. This is particularly relevant as various insinuations that severely impaired neuronal plasticity can trigger suicidal behaviors.

Does CBD Get You High?

Many would have been nurturing the thought that using CBD oils as a treatment option for anxiety can get you “high.” Fortunately, as against the popular notion, CBD oils won’t get you high. This is due to the absence of psychoactive effects on the brain.

While cannabinoids does influences all sorts of neurotransmitter receptors present in the brain, the “high” is the incredible result of the THC. This simply implies that no THC, no High.

The most lucid and concise response to this question is No, A Capital No. Unlike the use of weed or other products of marijuana, the use of CBD oils as a remedy for anxiety isn’t addictive. The World Health Organization in 2018 posit that there is an absolutely zero case of published health problems observed in people who take CBD oils consistently.

Since CBD oils have been proven effective in the treatment of a wide range of both medical and psychological problems, we can reasonably agree to the fact that CBD oils are safe for use by all and sundry.

Interestingly, it is a well-known fact that CBD oil is used as a natural supplement by millions of people all across the world without any report of medical complications.

Furthermore, both human and animals experimental studies have proven that CBD oils are safe compounds that can eliminate colitis in mice while also acting as a chemopreventive supplement in the treatment of colon cancer.

Above all, experts all across the globe have agreed that using CBD oils for the treatment of anxiety and depression is perfectly safe. Apart from that, it is also a surprisingly effective alternative to traditional therapies.

The Side Effects of CBD Oils

As with the activities of any substance that interferes with brain activities and healthy functioning, CBD oil could pose a relatively unpalatable adverse effect. The most common ones include:

The roles of CBD Oil in the treatment of anxiety-related disorders are still yet to the clear as many numerous long term studies continue to evolve in order to rightly assess both the benefits and risks.

However, people with anxiety who have gotten no other viable alternative can make use of CBD oils as it offers potential solutions.

If you are experiencing symptoms such as restlessness, irritability, fatigue, muscle tension, difficulties in concentration, and sleep problems at frequent intervals, you are advised to speak with your doctor as soon as possible. By establishing a close relationship with health care providers, you would definitely discover anxiety treatment plans that are perfect for you.

Remember, leaving anxiety to go untreated can deplete your quality of life as well as results in other physical health issues. However, it is highly crucial that you consult your medical personnel first rather than relying on self-treatment or self-administration of drugs.

All in all, if you are thinking of making effective use of CBD oil in managing anxiety especially in countries where it is legalized, ensure that you speak with your doctor in order to determine whether it right for you.